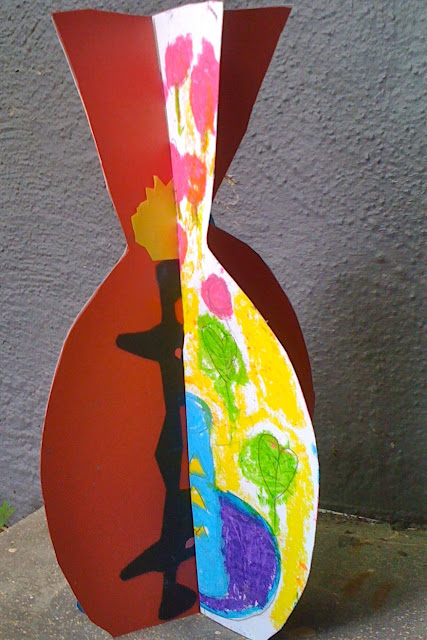 
DISCUSSION: Pattern
What is pattern? What do we need to create pattern? repetition
Where do we see patterns in everyday life? clothing, wallpaper
Look at the Matisse work:  Odalisque in Red Trousers
what do you see in this piece
is there pattern, how many?
can we create a story for what is happening?
Did he use  live model for this work? or is this a still life?
what do her face and arm say about her mood?
Now look at Goldfish from 1911
what do you see in the piece
do you like the colors? are there complementary colors?
do you see a pattern
let's make up a story about what might be happening in the piece.
ARTIST: Henri Matisse 1869-1954
French Painter,
Studied law until he was 21
Mother gave him a paint box after surgery and he discovered painting
In 1891 set off for Paris.
Matisse began his journey of studies which ultimately lead him to his love of line, shape and color.
Matisse felt that his greatest influence had been the work of the artist Cezanne (1839 – 1906, French).
In the 1950‘s, Matisse began creating paintings using paint and paper cut outs.
In his last years, as he aged and fell ill, Matisse continued to paint, this time on the walls of his room, using a piece of charcoal attached to the end of a bamboo pole. He painted until his death in 1954.
Matisse had strong feelings about only one thing, the act of painting.
The purpose of these pictures, he always asserted, was to give pleasure.
For Matisse, painting was the rhythmic arrangement of line and color on a flat plane.
Light was expressed, not in the method of the Impressionists, but with a harmony of intensely covered surfaces.
For additional information please visit: http://en.wikipedia.org/wiki/Henri_Matisse
PROJECT:
step 1: grab one piece of tag board from the materials table
step2: with a pencil draw the shape of each side of your vase, from top to bottom on each side do not draw along the top or the bottom.
not too skinny, but fill your page
DO NOT CUT THE TOP OR THE BOTTOM OF THE PAPER. THEY MUST
REMAIN STRAIGHT IN ORDER FOR THE VASE TO STAND.
Step3: Let’s work together now to recreate the fish bowl
Step1: draw an oval in the middle of your vase
Step2: now draw two lines down either side of that oval
Step3: Now draw a curved line at the bottom of those two lines connecting them creating your fish bowl
Step4: Now add your fish  inside the bowl
Step5: draw a circle under your bowl for a table top that the bowl is sitting on add legs at the bottom
Step6: add a pattern behind your bowl: polka dots, stripes, etc.
Step7: You can also add plants if you like like matisse
Step8: now that you have drawn all the details spend the rest of your time coloring them in.
Remember the lessons in color you have learned.
Step9: fill in the first vase with pattern: stripes, dots, zig zags TAKE YOUR TIME.
MATERIALS:
tag board,
oil pastels,
Pencils,
Scissors
WEEK 2
Wild Fauves: (French for "the wild beasts"), a short-lived and loose group of early twentieth-century Modern artists whose works emphasized painterly qualities and strong colour over the representational or realistic values retained by Impressionism. While Fauvism as a style began around 1900 and continued beyond 1910, the movement as such lasted only a few years, 1904–1908, and had three exhibitions.[1][2] The leaders of the movement were Henri Matisse and André Derain.[1]
for additional information, please visit: http://en.wikipedia.org/wiki/Fauvism
Discussion: Collage
Matisse called Collage Painting with scissors
when he was 72 he was so ill he could not stand up to paint
He would paint paper with paint gouache (gwash) (heavy watercolor) and then cut shapes from them
He then had assistants help to place the shapes on the walls of his studio
He called this last 14 years of his career his second life.
Let’s take a look:
Icarus, 1947
What do you see?
What colors did he use? and what does that help tell you about the subject?
what is the dominant color? and positive space?
What is happening in the positive space?
second piece: what is happening in this work
Very simple: what color does he choose, why?
what do the shapes tell you?
PROJECT: RECREATE matisse’s Icarus
Step1: using your vase from last week cut out a second vase from tag board
Step2: choose a background color in construction paper and cut a third vase
Step3: glue this vase onto the first vase creating a full color background like matisse.
Step4: begin to cut a shape from the black construction paper that resembles Icarus, This is where you paint with scissors.
Step5: Glue your icarus onto you vase
Step7: Cut out the stars like matisse, think about your color choices
Step8: add the little heart accent on the chest of your Icarus
Step9: on the back Cut and glue a pattern from construction paper. Could be circles, squares, lines.
Materials:
Construction paper in all colors
Scissors Glue
ALL PHOTOS ARE OF ONE FINISHED VASE: 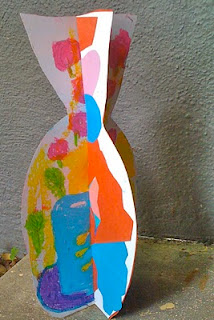 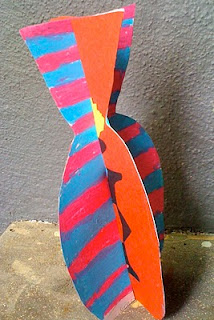 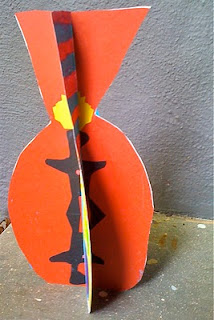 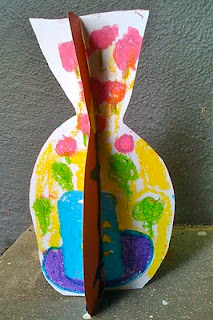 I adapted this project from one I found on Dick Blick. for additional information and many awesome lesson plans, please visit: www.dickblick.com.
Posted by Mollie Morrison at 4:50 PM

That is awesome! I hope it works as well for your classroom as it has in mine. If you post your results, please link them back to my page. Thanks!!! Oh, and become a follower.

Elementary Art Lesson Plans For ALL

My name is Mollie Morrison, I live in Sacramento, CA. I have been teaching art since 2001. Kids Art Market is my collection of preschool to high school ART lesson plans that have worked well in my classroom. I call it a market because just below you can find what you are looking for by aisles. For example, if you want to study an artist, check out the artist aisle. If you want to try out chalk pastels, take a look in the medium aisle. I tried to make it very easy to quickly reference all of your ideas, and mine!!! Enjoy easy lesson plan shopping!!!

Mollie Morrison
Artist and Art Teacher. Graduated in fashion and art from Meredith College in North Carolina in 1995. Worked in fashion for DKNY in Atlanta, GA and San Francisco, CA. Married and moved to Sacramento in 2000. Began teaching art to K-8 in the fall of 2001 at a private school. Had my daughter in November 2002 and my son was born in May 2005. I found that the more I taught Art the more I LOVED IT. This year, I have found my permanent teaching assignment at C.K. McClatchy High School. I am teaching Ceramics, 2D Art and Theater. I feel like I am the luckiest gal in the world that I get to share art with young minds. So I am off...Happy Art!